The major components of a ball valve include:

Valve body – A pressure vessel that contains the components needed to control or shut off the flow through a pipe. It is designed to connect two or more sections of pipe or tubing to each other.

Ball – A sphere with a flow path (hole or tunnel) through the center of it and a connection point for a shaft to rotate it.

Seats – Round donut-shaped discs that form a seal between the body and ball.

Stem – A shaft that connects the internal ball to the outside of the valve to facilitate rotation of the ball.

Packing – Flexible seals that fit around the shaft and prevent the media traveling through the valve from escaping externally.

Bonnet – The part of the valve body that houses the stem and packing.

Operator or Actuator – An external device designed to rotate the stem of the valve. This can be a lever, a gear, a motor-operated gear (electric actuator), or a pneumatic/hydraulic actuator. Floating - The majority of ball valves have a floating ball. The ball is supported by the valve seats.

Trunnion - Valves with large diameters and high operating pressures (for example DN >100mm and 30 bar) have often a trunnion design. The ball is supported on the bottom and top to reduce the load on the seat rings. The operating torque is generally lower for trunnion valves.

The hole through the ball may have different profiles such as a full bore, reduced bore or V-shaped.

Reduced bore - Most ball valves have a reduced bore. As a result, the ball valve introduces friction losses in the system. These losses are still relatively small compared to other types of valves. One-piece ball valves are almost always reduced bore.

Full bore - Full bore valves have the same bore diameter as the pipe. The advantage is that there are no extra friction losses, and that the system is mechanically easier to clean (pigging). The downside is that the ball and the housing are bigger than a standard ball valve with reduced bore. The cost is therefore slightly higher, and for many applications this is not required.

V-shaped - The hole in the ball or the valve seat has a "V" shaped profile. As a result, the desired flow rate can be controlled more precisely by rotating the ball. By optimizing the profile, a linear flow characteristic can be approached.

What are the differences between floating ball valve & trunnion ball valve. There are major 5 points. 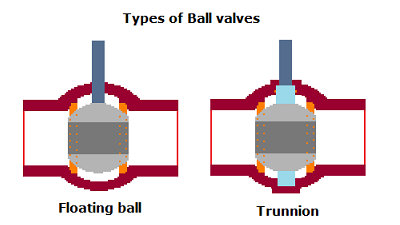 The floating ball valve is suitable for medium and low pressure and usually has a small diameter.The trunnion ball valve can be used in high pressure conditions and the size can be up to 60 inches.

To the floating ball valves, the trunnion ball valves are usually used longer, has smaller size and easier to operate.